Preliminary data suggest patients may be happier with IOLs that leave them a little far-sighted rather than near-sighted.

A cataract patient’s predicted postoperative refraction straddles emmetropia with available intraocular lenses (IOLs)—a 21.5 D lens will leave them at -0.32 D and a 21.0 D lens at +0.14 D. So, which do you choose?

“Surgeons face this all the time and often say, ‘I’ll choose the 21.5 D and leave the patient a little myopic; they’ll be happy, and they’ll get better functional vision even though they want emmetropia.’ I think, I think, I think, right?”, Steven C Schallhorn MD told EuroTimes in an interview.

But if confirmed, the results of a preliminary analysis may show this conventional wisdom is a bit misguided. “Actually, you may be better off if you choose the 21.0 D lens and target slight hyperopia. That’s what the analysis suggests,” Dr Schallhorn said.

The preliminary conclusion stems from incidental findings of a retrospective study involving 18,648 patients who underwent refractive lens exchange or cataract surgery at Optical Express outlets in the United Kingdom. The study’s main focus was the impact of residual astigmatism on acuity and patient satisfaction, Dr Schallhorn pointed out. “The sphere findings fell out of the analysis. And it even applied to monofocal IOLs.”i

Regarding postoperative sphere, the study found patients were approximately five times less likely to achieve 20/20 uncorrected distance visual acuity and three times less likely to achieve 20/16 if they ended up with slightly myopic than slightly hyperopic, defined in this case as a residual sphere of 0.25 D to 0.5 D plus or minus. “We’re not talking about leaving the patient significantly hyperopic. It is about straddling emmetropia,” Dr Schallhorn noted.

Patients who ended up slightly hyperopic were also about 30% to 40% more likely to report they were satisfied with their visual results, whether they received a multifocal or a monofocal IOL. Dr Schallhorn said the finding was not as surprising for multifocal lenses (since the near add might improve distance vision a bit), but it was surprising for monofocal lenses with no add to offset slight hyperopia. “We thought ‘that is quite perplexing; maybe we need to rethink, given most IOLs are available in 0.5 D increments, how we’re targeting the lens power.’”

Consistent across all monofocal lens types, refractive and reported satisfaction results seemingly ruled out differences in asphericity as a reason why they might slightly compensate for hyperopia. One possible explanation may be how the brain interprets images that focus slightly behind the macular surface (or slightly hyperopic) more readily than those similarly focused in front of the macula (or myopic).

However, the study was not powered or designed to tease out such distinctions, Dr Schallhorn added. He is now looking at a larger data set focusing specifically on sphere questions in the hope of confirming the earlier findings and isolating factors that may better explain the results.

Nonetheless, the incidental findings from the prior study were statistically significant, suggesting possible merit. “Patient reported outcomes have a lot more variability than clinical measurements, so when they give you a significant result, it’s usually important,” Dr Schallhorn explained. 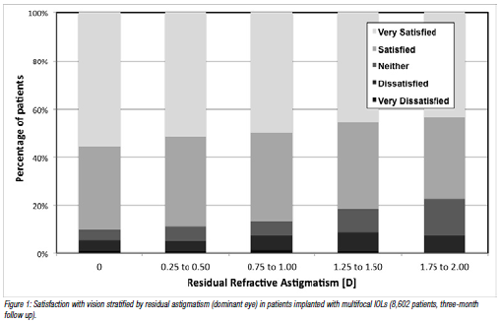