A new extended depth of focus (EDOF) intraocular lens delivers excellent quantity and quality of vision, with reduced dysphotopsias and a high level of patient satisfaction, according to Gilles Lesieur MD.

“The new lens performed very well and compares favourably with other EDOF lenses we have implanted in recent years. Patient satisfaction is very high, with many patients achieving total spectacle independence and no visual symptoms at the three-month follow-up mark,” he said. Near vision correction for long reading activities is nevertheless often prescribed.

Dr Lesieur reviewed the refractive and visual results of the LUCIDIS IOL (Swiss Advanced Vision) lens and compared the outcomes with those of two other EDOF lenses—Synthesis Plus (Cutting Edge) and ISOPURE (BVI Medical)—implanted between 2018 and 2020.

“The LUCIDIS achieved the best results for near and far vision compared to the other EDOF lenses, with the Synthesis Plus performing best for intermediate vision,” he said.

Discussing the lens properties in more detail, Dr Lesieur said the LUCIDIS is a hydrophilic acrylic lens with a central aspheric element surrounded by an outer refractive ring. It has a closedloop haptic design, with a 6.0-mm optical diameter and a total diameter of either 10.8 mm or 12.4 mm, depending on the IOL model selected. A toric version is also available.

The patented Instant Focus technology of the lens extends depth of focus characterised by a constant resolution and peak of light intensity. This peak of light is obtained through a constructive light wave interference concept generated by an aspheric surface in the centre of the lens. The resulting beam of light is called Pseudo-Nondiffracting Beam (PNDB), which maintains a constant resolution and light intensity on the retina.

Dr Lesieur’s study included 23 patients bilaterally implanted with LUCIDIS through an incision of 1.8–1.9 mm, with follow-up visits scheduled at one day, one month, and three months after surgery.

Defocus curve results showed LUCIDIS performed better than the other EDOF lenses in earlier studies, although the Synthesis Plus came top for intermediate vision. For corrected distance visual acuity, 100% of patients obtained 20/20 with LUCIDIS compared to 82% for ISOPURE and 79% for Synthesis Plus. For distance-corrected near visual acuity, 94% of patients implanted with LUCIDIS attained 20/32 or better compared to 47% for Synthesis Plus and 14% for ISOPURE. The results for light scatter were also statistically significant in favour of LUCIDIS and showed less light dispersion than with the other two EDOF models.

In terms of side effects and complications, Dr Lesieur said the safety profile of the lens, with around 1,000 lenses implanted to date, has been very positive overall.

“We did have a few instances of capsular folds and a very small number of patients who experienced disturbances in photopic far vision. While we initially thought the issue was related to pupil diameter, we now think it is caused by postoperative inflammation and it is usually resolved within a few months,” he said.

Correct sizing is another issue to be aware of with these lenses, Dr Lesieur advised.

“We had some capsular phimosis for the 124M model in smaller eyes with an axial length less than 21.5 mm and/or a white-to-white of less than 11.5 mm. We now try to avoid these particular implants for these smaller eyes. We also had a few isolated cases of lens rotation with the smaller diameter 108MT model, but unfortunately, it is difficult to screen these patients preoperatively to avoid such issues. The larger diameter IOL, combined with its non-polishing surface, shows excellent stability in the capsular bag, and patients are very happy with their outcomes overall,” he said.

Gilles Lesieur MD is an ophthalmologist in private practice in Albi, France. g.lesieur@centre-iridis.fr

Paul Dupeyre MSc, is an optometrist in private practice in Albi, France. 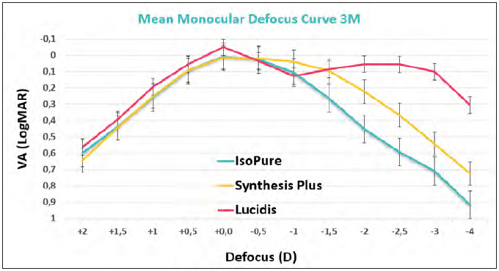