Waste from phaco surgery is considerable, and underestimated.

Waste produced by phacoemulsification cataract surgery can be significant and underestimated, according to a new study presented by Dr Emilie Mahon at the annual Irish College of Ophthalmologists (ICO) conference.
Dr Mahon conducted a study in her department on perceptions of the eye theatre staff on waste generated by cataract surgery. She also assessed the weight of waste produced from a single straightforward phacoemulsification cataract surgery. The staff was found to significantly underestimate the waste generated by surgery in equivalent carbon dioxide emission and equivalent petrol consumption. The mean waste produced by a standard, uncomplicated surgery was four kilograms.

Dr Mahon also identified a potential appetite for change: most staff (77%) reported they regularly think about the environmental impact of cataract surgery, and most felt that waste produced by surgery is not environmentally sustainable.

Waste production due to cataract surgery is a hot topic, with David F Chang MD speaking on the environmental impact of the surgery and drawing comparisons between standard phacoemulsification in the West with the much smaller waste production—and thereby carbon footprint—of manual small incision cataract surgery in India in his Ridley Medal Lecture at the ESCRS Congress in 2020. In the UK, the President’s session in the Royal College of Ophthalmologists 2022 Congress, chaired by Professor Bernie Chang, centred around sustainability in ophthalmology. This focus ties in with the UK’s National Health Service net-zero emission goal. Sustainability is also a theme of the ESCRS Annual Congress in Milan.

What approaches are possible to reduce the carbon footprint of our cataract surgeries? That classic triad of principles—reduce, reuse, recycle—is a good starting point. In particular, reducing and reusing may have a large impact.

Reducing the carbon footprint can be achieved by streamlining the usage of equipment and materials in surgery. Single-use equipment opened during surgery should not include instruments or materials not routinely used. Within surgery, another important source of emissions can be anaesthesia. Cutting down requests for sedation and general anaesthesia, which utilise gases such as nitrous oxide that have a much worse environmental impact than carbon dioxide, will cut emissions further.

The streamlining efforts can extend on from cutting down on physical waste to reducing wasted time and energy by looking at the patient pathway and the efficiency of the operating theatre. In Ireland, Mr Paul Mullaney has pioneered these efforts. Mullaney, Consultant Ophthalmic Surgeon in Sligo University Hospital, developed a high-volume cataract surgery service, including a postoperative care pathway where patients follow up with community optometrists rather than hospital-based ophthalmologists.

In the global effort to reduce the environmental impact of our profession, every little bit helps, including efforts to examine our carbon footprints in our own ophthalmology departments. “Ophthalmologists must now contribute to the transition of reducing carbon footprint by including ecologic and economic pillars of sustainability in choosing the components of their cataract surgery trays, thereby playing their part in ‘keeping an eye’ on the planet,” she emphasised. 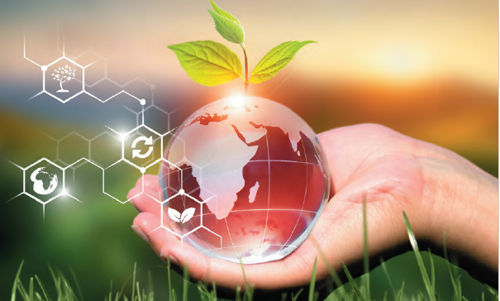