How to Tackle Astigmatism in Each Step of the Surgical Process 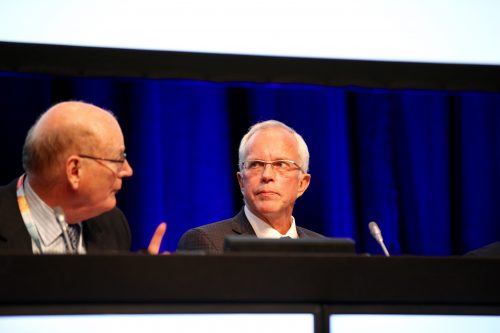 The ESCRS Symposium, ‘Astigmatism Management in Cataract Surgery’, addressed what seems to be the single most pressing issue in anterior segment surgery today – how to tackle astigmatism in each step of the surgical process.

“The ability to manage astigmatism might be the one factor that has had the most significant impact on our surgical practices in the last decade,” said Dr Graham Barrett, Australia, during his presentation. “There has been a complete paradigm shift regarding the level of acceptable residual astigmatism after cataract surgery,” he said.

Dr Barrett finds that, when applied correctly, astigmatism prediction has become as accurate as spherical prediction. “I target even the most minimal residual cylinder, and I thus use toric intraocular lenses (IOLs) in 80% of astigmatic patients,” he said.

Dr Warren Hill, USA, presented his views on intraoperative biometry, which, on average, he considers superior to preoperative calculations. “It provides a net solution, which includes the anterior cornea, posterior cornea and toric IOL, for the amount of toricity and its proper orientation,” he said.

“Intraoperative aberrometry is very sensitive to different vergences in different meridians. These relatively small differences are less influenced by the effective lens position.”

He said that this aspect allows the measurement of the astigmatic portion of the total refractive error to be more accurate than the spherical portion.

“I see this technology allowing us to go to new places that we otherwise wouldn’t consider with toric calculators,” he concluded.

“Simple dry eye can have a significant effect on keratometric cylinder, leading to readings of greater than 1.0D difference between two visits.”

Dr Gerd Auffarth, Germany, addressed the challenge of marking the axis for the placement of toric IOLs. “Correct marking is crucial, as every degree of misaligment reduces the effect of the toric correction,” he said.

Reviewing the many methods, from manual marking with an ink pen to femtosecond laser marking, Dr Auffarth concluded that, while most methods are very precise, the outcome is largely dependent on rotational stability of the toric IOL design and material.

Dr Rudy Nuijts, The Netherlands, offered advice on managing the worst of all outcomes, the misaligned IOLs and severe astigmatic surprises.

“The first step is to analyse which factors contribute to the unexpected outcome,” he said. “Is it surgically induced astigmatism, posterior astigmatism or IOL misalignment?”

The decision to rotate or exchange a misaligned toric IOL depends on the amount of ametropia and residual astigmatism. “But for errors greater than 1.25D, IOL exchange or laser refractive touch-up is usually necessary,” he added.

“However, surgical correction is not common in our database,” said Dr Nuijts. “Realignment is necessary in about 2% and exchange and laser touch-up in about 1%.”

Overall, Dr Douglas Koch, USA, urged delegates to “be sceptical of measurements and be critical of your own data”.